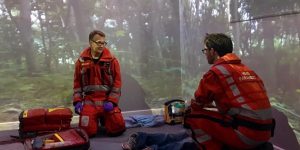 Our pioneering Immersive Simulation training facility has been nominated for an award at this years’ Air Ambulance Awards of Excellence.

Up against East Anglian Air Ambulance and Essex & Herts Air Ambulance Trust with their latest innovations, we have been nominated for Innovation of the Year, an award that has been sponsored by Sloane Helicopters.

The new facility provides a number of functionalities, including the ability to project a series of mock incident scenes, complete with movement and sound.  Our crew are able to simulate a multitude of different training environments; from a busy nightclub to a Hampshire forest.

Jim Fitzpatrick MP, Chair of the Judging Panel, commented: “It’s easy to run out of superlatives when discussing the nominations for the Air Ambulance Awards of Excellence. My fellow judges and I had the privilege of reading about some truly extraordinarypeople for whom excellence comes as standard. Reading about some of the incidents that air ambulance services have been involved in over the past year has been astonishing and humbling. It is always hard to whittle down the entries but after some considerable agonising, we now have our shortlists. Best of luck to all those shortlisted and congratulations to all who entered.”

The winners will be revealed at the awards ceremony to be held on 13th November at the Millennium Chelsea Harbour Hotel, London.