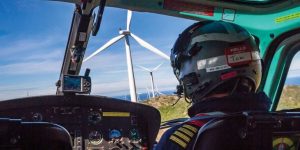 The process of using the wind to generate electricity has been around for over a hundred years. For a long time, wind turbines just provided power on a local scale, but with the shortage of oil and the resultant steep price rises of the 1970s, alternate and renewable energy sources were sought out — and wind power on a large scale became a viable option. Although we’ve seen oil supplies and oil prices rise and fall since, wind farms — a collection of co-located wind turbines — have become commonplace around the world. In the U.S., progress on wind energy has been slow but steady.

The location of wind farms depends on a number of factors. Most important is whether there is a consistent wind flow of sufficient velocity to generate significant amounts of electricity. There is also a general desire to locate wind farms away from densely populated areas.

The first offshore wind farm was built off the coast of Denmark in 1991. With the need to secure these turbines to the ocean floor, offshore wind farms tend to be close to the coast in shallower water. In the future, floating turbines may greatly expand the offshore component of the industry.

The boom in wind energy has provided a new area of growth for the helicopter industry as other sectors of the energy field have faltered. But while the growth of work to support this flourishing sector has been welcome, wind farms also present a few aviation safety issues that should be understood.

There are two structures that wind energy companies erect that can pose a physical threat to low flying aircraft. In the “prospecting phase,” companies will install meteorological evaluation towers (METs), which contain wind measuring equipment. These towers are typically made from galvanized tubing, with a diameter of six to eight inches, and can be over 200 feet (60 meters) tall. They can be installed quickly — sometimes within hours — and are typically slender and can be difficult to see without markings or lightning. The supporting guy wires can be even less visible.

In the U.S., there isn’t a requirement for towers under 200 feet above ground level to be visibly marked or registered if not in the vicinity of an airfield. Companies could install towers just under 200 feet in height to conceal their location from competitors — but also, unfortunately, from aviators. There have been several fatal accidents involving MET towers in the U.S., with the most recent being in 2016. Although all of these involved fixed-wing aircraft, four of them were engaged in agricultural applications — a task often completed by helicopters.

To address this problem, the Federal Aviation Administration (FAA) issued Advisory Circular AC 70 7460-1L on Oct. 8, 2016, which outlined steps to clearly mark/light METs and their supporting guy wires. However, the steps remain just recommendations for towers under 200 feet.

Despite this, there have been a number of states that have passed regulations requiring these towers to be marked and registered, and other states have proposed similar legislation. To help pilots learn about the location of these potential hazards, the FAA keeps an online database — the Digital Obstacle File — which includes registered METs. Some states also have lists of MET locations available online.

In Canada, Transport Canada requires towers over 194 feet (59 meters) to be painted with a highly visible striped pattern and their supporting guy wires to have high visibility sleeves or marker balls. As in the U.S., these are only recommendations for those towers that are under 60 meters in height.

Once a potential wind farm site has been selected, the power generating wind turbines themselves will be erected. These are massive structures, often rising over 500 feet (150 meters) with the current record holder standing at 722 feet (220 meters). Future turbines promise to be even taller. Obviously, these represent a hazard for any low flying aircraft.

With the rapid expansion of the wind energy industry, the FAA has implemented specific regulations for wind farms. Companies must go through a certification process that starts with the planning phase of the project. All proposals for wind turbines or METs must be sent to the FAA’s Obstruction Evaluation Group, preferably at least 90 to 120 days before the planned construction of the tower. The group requires the exact location and height of each wind turbine, and after a thorough examination of the proposal, it will make a final determination. If the group sees no problems, a “No Hazard to Navigation” decision will be issued and construction can go ahead. If there are problems with the proposal, the construction company will be told the steps they need to take to receive clearance.

Transport Canada requires an Aeronautical Assessment Form for Obstacle Evaluation to be submitted by the proposing company, preferably as soon as a site is chosen. Any affected aerodome will be considered in the evaluation. In Europe, Eurocontrol offers guidance to its constituent members in these regards.

The FAA has long had marking and lighting requirements for large structures. These were updated in 2016 with very specific requirements for wind turbines. Transport Canada has similar requirements. The result is that under normal conditions, wind turbines are easily visible and avoidable. But if there are lighting issues at night, or if visibility is restricted, especially with instrument meteorological conditions, then the threat of collision increases.

The FAA’s (and other regulatory agencies’) emphasis has been on airports and surrounding areas, places where fixed-wing aircraft would typically be at lower levels. Away from built-up areas or airports, the standard lowest flight level is 500 feet for fixed-wing aircraft (with permitted exceptions). Helicopters, of course, are allowed to fly below this. Thus, with unrestricted wind farms, helicopter air space may be occupied by large wind turbines. To help in these situations, the FAA has an online database including existing and planned wind farms. The Digital Obstacle File described earlier also includes wind turbines. In addition, a number of states have lists of wind farms, and other countries typically have this information available, too.

Another concern to aviators is that a collection of wind turbines can cause problems with radar signals, significantly degrading radar performance. For weather radar, there are two specific situations noted. One is that the turbine itself shows up on the radar display — a non-weather-related “false echo.” And second, the turbine could block the radar signal and “hide” true precipitation behind it, including thunderstorms. There are similar concerns about air traffic control radar in terms of false targets and the hiding of real targets.

To mitigate some of these potential problems in the U.S., the National Oceanic and Atmospheric Administration’s Radar Operations Center has modeled each site using a standard wind turbine blade-tip height of 160 meters and determined potential negative effects on radar performance. It determined four zones of impact, from significant negative impact to unlikely significant impact. Using this, potential wind energy companies are advised where they are prohibited from building, where they can build but with restrictions, and where they are free to build unrestricted.

In Canada, both Nav Canada (with air traffic control radars) and Environment Canada (weather radars) are involved with approvals for proposed wind farms. In Europe, Eurocontrol also designates four zones, ranging from unacceptable degradation of radar performance to no significant effect on radar performance, with accompanying restrictions and/or requirements on planned wind turbines. For sites where there are already problems, the development of hardware and software mitigation measures can be applied to existing radar sets. In the future, such measures may be already incorporated into the new radar systems. Helicopter operations away from airports may just have to deal with radar issues. This would be true if using ground-based radar data or if the helicopter is equipped with its own radar.

Finally, as one would imagine with structures this large, wind turbines can affect the ambient wind flow. There have been a number of studies to explore the effect, combining fluid dynamics theory with actual observations. Large turbines will certainly slow the wind, known as velocity deficit. They will also produce wake turbulence for some distance behind them. Early research indicates this can be as much as five times the diameter of the rotor. It has also been noted that smaller aircraft, such as helicopters, may be affected by these disturbances in the airflow.

With over 90 countries around the world engaged in “wind mining” and many new wind farms in the planning stage, this will be a field of many opportunities and challenges for the helicopter industry.